How many visitors leave Bali without picking up at least one piece of locally crafted textile, usually a sarong? Even if you are a first time visitor, you can pick up one of Bali’s rarest textiles if you know where to look.

Most people are familiar with batik, a method of painting a design onto cloth with wax before dying it. The dye colours everything but the part under the wax, creating a unique, handcrafted print. And most people have probably seen an ikat sarong, produced by tie dying the warp threads that run the length of the cloth, before weaving them with weft threads of a single colour.

Unique hand crafted textiles made nowhere else in Indonesia

Double ikat weaving is much more difficult, making it one of Bali’s rarest textiles. The weaver tie dyes both the warp and weft threads before weaving them together. This requires exquisite tension control. If you want to see – and buy – double ikat, then you need to visit the people in a small village in south east Bali called Tenganan. This is the only place in Indonesia where double ikat is made. 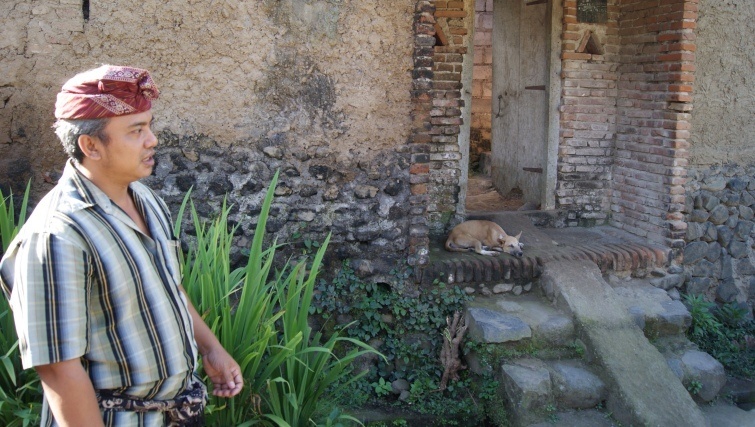 Tenganan is one of very few villages in Bali that has never submitted to Hindu rulers from Java. Described by a 1930s writer as “rabidly conservative”, the Tengananis have never become part of the Hindu caste system, and continue to follow their own centuries-old aboriginal customs.

To get to Tenganan, you pass through Candidasa and head north along a 4km dirt road. Travelling mostly through jungle, you come to a village with a curious entrance, like a box office in an outdoor cinema, blocking off part of the quiet street behind it. Outside the box office you will see two or three men sitting on chairs, each waiting for his turn to greet a visitor. 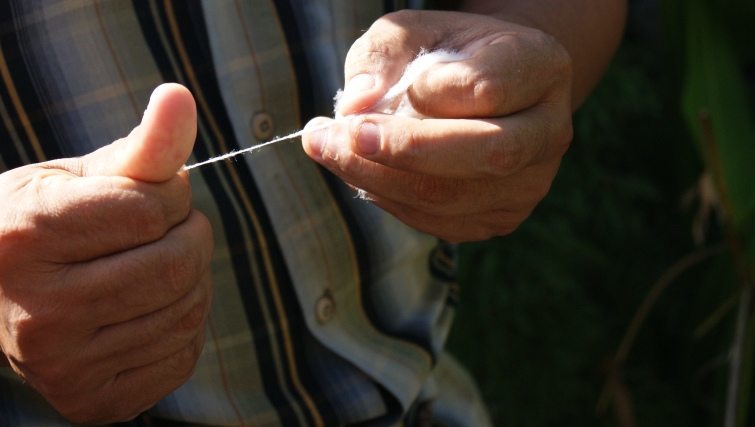 A courteous, softly-spoken man in traditional dress immediately offers to take you to his home, but there is no hurry. In near perfect English, Nengah Dika invites you to turn right and stroll slowly past the house at the end of the street. The building looks very old, with walls made of stones cemented together with mud rather than mortar. He stops beneath a cotton tree and picks a little cotton to show you how easy it is to spin the long fibres into a short thread.

There is none of the hustle and bustle common to other tourist destinations. Past the next house, you turn left again into what he tells you is Tenganan’s main street. Hardly anyone is in sight, and it is party overgrown with grass. An open shed on the corner has two wood-and-bamboo bins labelled “leaf litter” and “plastic waste” in Indonesian. 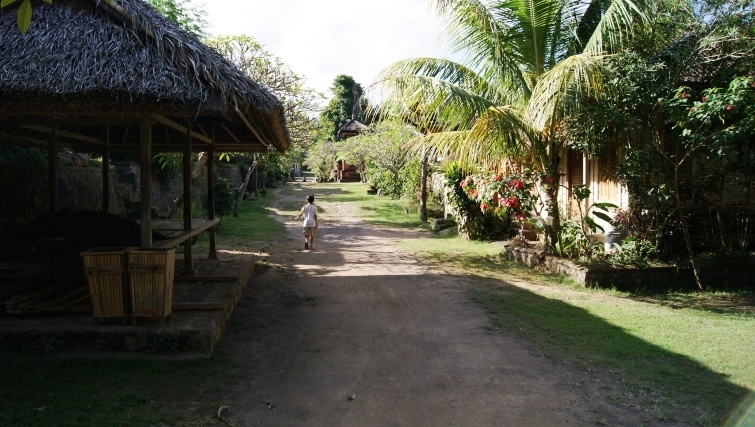 He takes you past several temples, and tells you how the Australian government sent engineers to repair one of the temples after a recent earthquake (with concrete, not mud). They also supplied a deep underground bore and a water tower to provide a reliable water supply. If you are Australian, he thanks you for this.

If you are an Australian “in the know” you may also see the recycling bins as a condition of the aid, like the anti-smoking signs displayed at events sponsored by tobacco taxes. 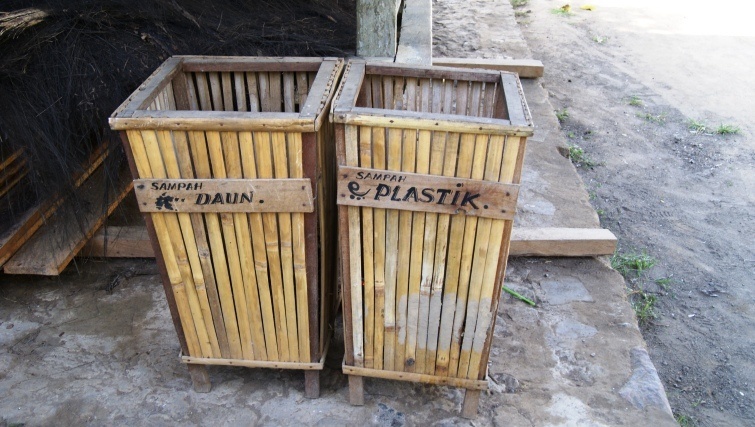 Despite these occasional modern touches, the place has a timeless feel. He explains how the village grew so large they decided to divide it into two banjars, or wards, “only two or three hundred years ago”.

Nengah Dika tells a little more about his people, the Bali Agas. These were the first people to settle in Bali, more than a thousand years ago, and the island still has a few Bali Aga villages that remain fiercely independent. “We have never been in conflict with each other,” he says, although clearly they were ready to defend themselves against the Majapahit soldiers who took over most of the island in the 14th Century.

Visiting a Tenganan weaver at home

After this leisurely history lesson, you arrive at his house. He takes you straight through the outer compound, hung with brightly coloured banners, to the main building where you meet his young wife, Ni Luh Suryati. And of course, her double ikat weavings, which are continuous loops of cloth in three or four colours: unbleached cotton, yellow, dark blue and red. 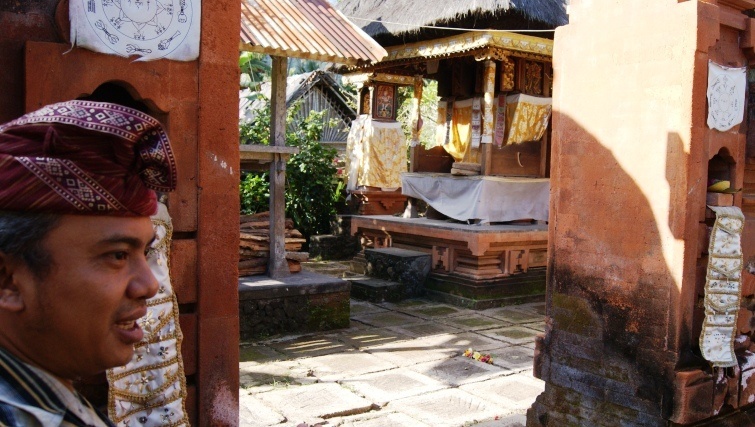 Ni Luh explains the double ikat process – without, of course, giving away any of the trade secrets needed to produce Bali’s rarest textiles. First, the cotton has to be picked and impurities such as seeds and husk fragments combed out before spinning. She then begins tie dyeing the warp and weft threads in a secret practice using home-made plant dyes and lots of prescribed rituals. The trick to achieving a perfect double ikat is not only in tie dying the vertical and horizontal threads to a matching design, but in making sure they weave together perfectly. 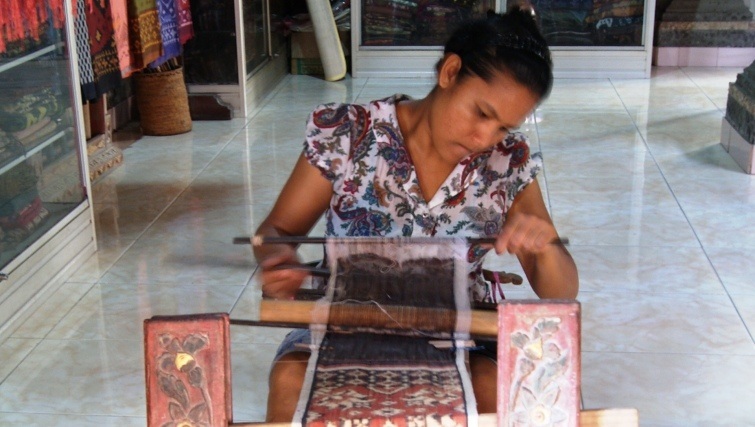 Ni Luh achieves this by controlling the tension on the warp threads with a special loom. Sitting on the floor, she passes the shuttle between the long threads in front of her. These long warp threads are also attached to a device on her back, allowing her to control the tension by leaning backwards with more or less pressure. She controls the tension on the sideways or “weft” threads by pulling more or less firmly on the shuttle after weaving each row.

The whole process, they tell you, takes about a year from start to finish.

Buying a double ikat – or two

Of course, you have come all this way – you don’t want to leave without at least one double ikat. Nengah tells you he recently sold an antique piece, in a design no longer made, to a German collector for seven million rupiah. 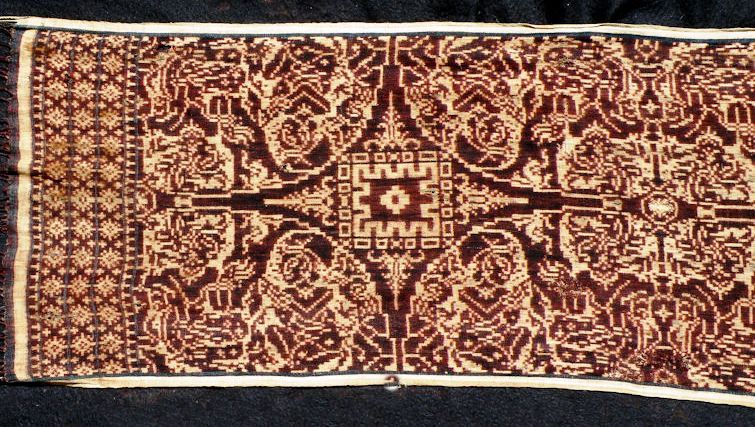 The haggling begins. Ni Luh mentions the price of two million rupiah, which of course, you can’t quite afford. Your companions offer to lend you the US and Australian dollars stashed at the backs of their wallets, and you end up settling for two pieces at three million for the pair. She has reduced the price of one single colour piece because it is not a continuous loop, the threads having been cut. They even throw in two carved wooden display hangers. Everyone is happy.

On the way out Nengah shows you the lontars he makes. These are traditional Balinese and Indian documents made by carving letters and images on to long strips of palm leaf with a stylus or knife, rubbing in lamp black afterwards. The original Hindu scriptures, such as the Upanishads, were first written on lontars, as were messages from Bali’s kings. 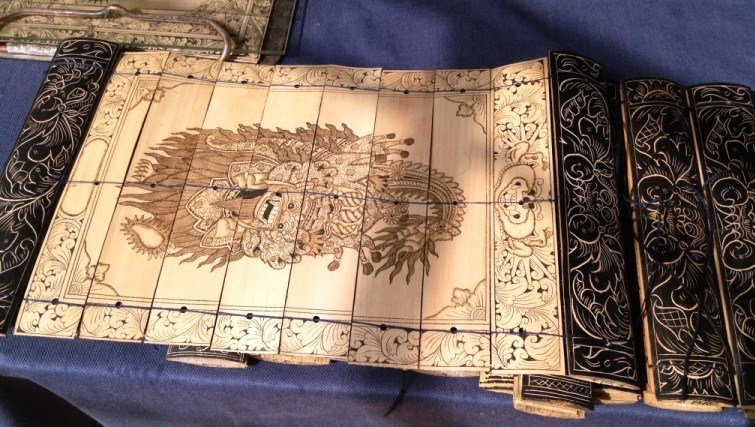 As you came to buy a double ikat, and have blown your weekly budget, you find yourself declining.

Why the village is so quiet

Taking your leave of the lady of the house, you follow the host outside and he offers to show you more of the village. It is getting late, and if you are staying in Ubud or Denpasar, it’s an hour’s drive home. Tenganan has no hotels and no shops. Only local villagers are allowed to stay overnight. You politely decline, and quietly head around the block and up the side street towards the “box office”, which you are still wondering about. Apart from the occasional scooter, the most noise comes from a dozen or so fighting cocks in cages, placed to catch the afternoon sun. 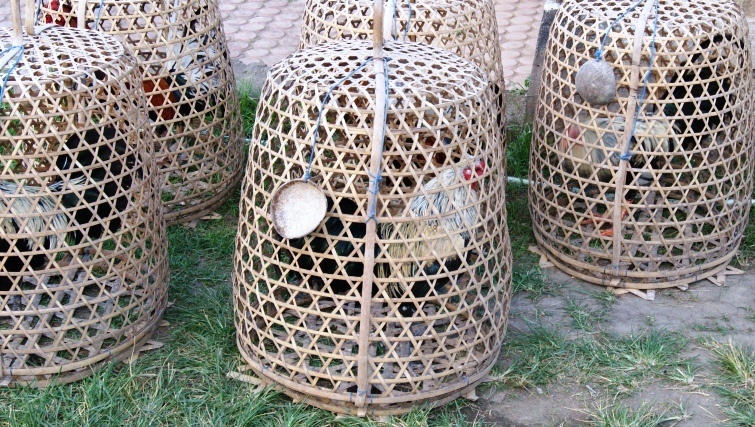 Once a year, Nengah tells you, crowds descend on the village for the annual pandanus fighting. Protected only by thick turbans and double sarongs, pairs of men square off with the spiny butts of pandanus palm leaves as weapons. Each man attempts to wound his opponent’s naked torso, and they frequently go into clinches, flailing at each other’s backs with the primitive weapons. This looks a lot like a drill from previous centuries, to ready the men for hand-to-hand encounters with their enemies. He describes it in such a gentle voice that it sounds incongruous.

He asks how we found out about his village, as most visitors he meets have been to Bali perhaps five or ten times before they hear of it. You smile. If you go looking for treasure, you don’t follow the crowd, do you? 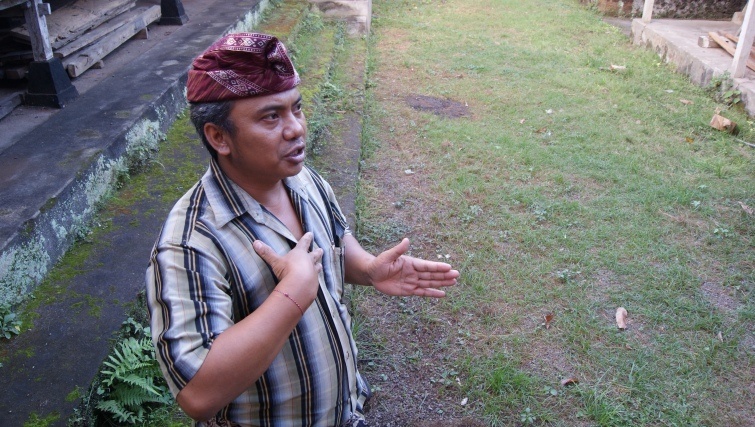 Why these treasures are so rare

Back home, your friends admire your new double ikat wall hangings with just a touch of jealousy. They have been to Bali many times. But you, the novice, have been somewhere they have never heard of and picked up something rare.

Double ikat’s future is uncertain. Some traditional designs are no longer made. Only a few women in Tenganan village now practice the art. You find yourself wondering why. In today’s cash economy, other families may have decided not to welcome curious strangers into their homes to buy Bali’s rarest textiles. Perhaps their privacy is just too precious.

Apart from Tengannan, double ikat weaving is made in just three other locations – two in India (Gujarat and Telangana) and one in Japan (Okinawa). If you can’t make a trip to Tenganan, double-ikats are currently for sale on Ebay for between AUD$750 and $3,500.